Kevin Houser is full-time Ubiquiti trainer, and member of wifi-U team, living in Southern California. He has been a trainer for over 35 years, a devoted to Ubiquiti Instruction for many years and holds certification in many disciplines, including CWNA, MCSE, and CCNA. He is the author of “The Unauthorized Guide to Ubiquiti Routing and Switching”, which is a companion book for the Ubiquiti UBRSS course and “The Unauthorized Ubiquiti Radio and Access Point Handbook: Deploying, configuring, and troubleshooting Ubiquiti Radios and Access Points”.

Webinar: What’s New with UniFi APs, and How Do I Choose?

The “What’s New with UniFi APs, and How Do I Choose?” webinar was hosted by DoubleRadius on Nov. 30th, 2022. The presentation was made by wifi-U as special guest. A review of security gateways, controllers, and switches is followed by an AP comparison including AC Wave 1 & 2, ceiling mount, in-wall, mesh, HD & XG models. WiFI-6 802.11ax is covered towards the end, and the primary improvement of OFDMA.

Recently I got a chance to teach the Ubiquiti Broadband Wireless course to a group of engineers down in Houston, Texas. MicroSeismic deploys a type of underground radio probe that helps oil companies find oil deposits fractures. Their technology relies on very low frequency radio waves that penetrate the earth’s core for many miles.

They use the Ubiquiti Airmax AP’s to create a large grid that connects multiple probes and allows them to manage all the devices throughout a deployment area.

The probes go down approx. 200’ in the ground and then have a control box that can connect into a switch that the Airmax AP is also connected to.

We spent two days reviewing the AirMax AC devices and the M series AirMax APs. The company uses both, as sometimes they need to use 2.4GHz devices in their large territory deployments. We went through how to do Point to Point and Point to Multipoint connections with both technologies and worked on how to have the clearest signals on long distance connections.

For Microseismic, the data they are transferring isn’t very intensive, so we talked about the advantages of smaller channels and how they are less prone to interference. We had a great time testing all their different equipment and making it work. The guys were real easy to work with and I felt like we accomplished a lot, and I had a great time learning about their underground wireless technology!

Join Us to the New Wireless Adjuster Program

Troubleshooting Wi-Fi seems like a difficult thing to conceptualize. This video answers to questions about how to tackle troubleshooting and how to take advantage of the Wireless Adjuster class.

Check out our new classes.

Few things to do prior to coming to class, so you get the most of your class experience:

When we set up our networks in the UEWA class our students get to pick the name. We’ve had some pretty funny ones over the years. Here are some of the best. Tom Lawrence @Lawrencesystems.com contributed to this list:

I believe Wi can Fi

Tell my Wi Fi love her 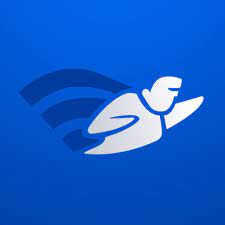 When teaching the UBWA class, I have had students download the Device Discovery Tool from the Ubiquiti download page, but recently we’ve run into a problem with the tool.  In order to run it you have to have Java installed, but the Device Discovery tool doesn’t work with the latest version of Java, version 8 update 291.  In order to run the tool you need Java version 8 update 251, and it’s difficult to find Java 8.251.  if you want the old discovery tool You can download Java 8.251 64bit here https://www.filepuma.com/download/java_runtime_environment_64bit_8.0.2510.8-25279/

Then you can install the old Device Discovery tool from here: https://www.ui.com/download/utilities/default/default/device-discovery-tool-java-all-platforms

However, you may want to try the new WiFiMan desktop app instead. It runs discovery just like the Java tool but it runs as an executable file. It can run on Windows, Linux, and MAC. The problem I found is that it’s hard to find the download location for it. The app isn’t fully functional yet so the version that you download says it’s version 0.2.2.

As for now, we are kind of stuck in-between tools. People are having trouble with the Discovery of devices through WiFiMan.  The Java version works well, but only on the older version of java.

My advice is to try them both and see what works for you. For now, I’m going to use the old Java based tool and hope that the WiFIMan Desktop app is released in a functional version soon.

VLANs on UniFi with a Different Router

In this video we will show you how to create WiFi Networks on different segments with VLANs already created on a different router.

Does Wi-Fi cause radiation sickness?

Back in the 1970’s when I joined the military, I was in a Scout platoon and I was trained as a Ground Surveillance Radarman, MOS 17K.  The device that we used created a radio wave in the J Band (16GHz).  We used headphones to listen for changes in the 10KM area in front of us. We learned to be able to detect tanks, jeeps, and if we were really good, we could detect people moving through the area. The nomenclature of the Radar was AN/PPS5. It had a 1 degree bandwidth and a 50dBm transponder.

The old-timers in the platoon would tell the newbies, “If you stand in front of the radar for too long it will make you sterile.” 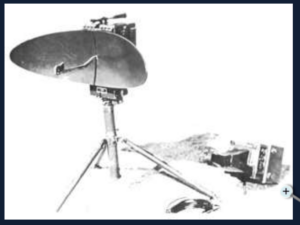 Apparently that wasn’t true because those guys spawned a new generation of tin-foil hat wearing crazies that claim Wi-Fi signals can harm you if you stand in front of an Access Point, or hold your smart-phone too close to your head.

Wi-Fi is based on creating radio waves in the 2.4 and 5GHz bandwidth spectrums. They are specific frequencies, created by an intentional radiator that emit from a directional antenna. The radio waves are part of the electro-magnetic spectrum, just like light waves, x-rays, and gamma-rays. As part of the electromagnetic spectrum, Wi-Fi radio waves travel at the same speed as other radio waves, so if anyone ever complains that the Wi-Fi is slow you can tell them that it’s travelling at the speed of light (300,000,000 m/s)! 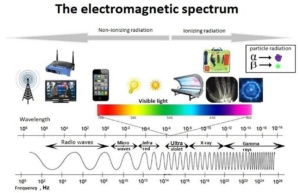 The radio waves in 2.4 and 5 GHz measure approximately 5.5” and 2.25” respectively, so they are not small enough to penetrate cells in our body and thus pass through. Our bodies do absorb some of the energy that is emitted from an intentional radiator as it passes through us so the question is, how much power is emitted from a wireless access point?

Wi-Fi is a very low power technology. The amount of power generated has to match the power domain of the devices that the access point will support, otherwise our smartphones and computers would be able to receive the signal but the access points would not be able to detect the incoming signals due to a power mismatch.  That signal strength has been determined to be around 20dBm. At this power level smartphones can create the power needed without needing to increase the form factor of the device.

You might ask, how much power is 20dBm? DBm stands for decibels per milliwatt.  It’s an algorithmic representation of power based on the watt measurement system. 20dBm equates to 100mW which is one tenth of one watt. So the total amount of power that is emitted from an Access Point, and measured directly on the face of the AP, is one-tenth of one watt.

As the Wi-Fi radio wave travels through the air it loses power so that after the wave travels one meter the strength has dropped by 40-47 Db, so that at one meter out the signal strength will be less that one milliwatt. Not enough power to do much more than elevate a radio-wave above the noise of other radio waves and definitely not enough power to affect our cellular tissue.

The AN/PPS-5 had an Intentional Radiator of 50 watts, so it was considerably stronger than a Wi-Fi Access Point. It created waves in the J band, which is in the 16 GHz range. That converts to about .75 inches wide, still, hundreds of times larger than a cell.  So even though I spent a lot of time in front of our Ground Surveillance Radar system, I was still able to produce a normal family.

Blessings from the Webers!